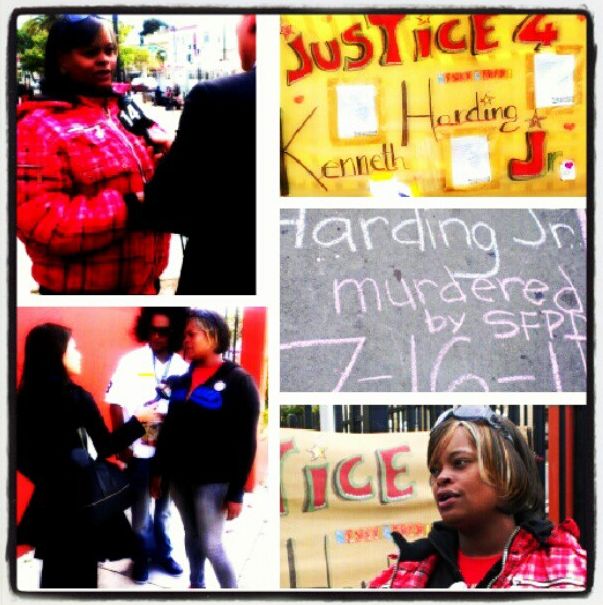 Posted by Kenneth Harding Jr. Foundation at 11:59 PM No comments: 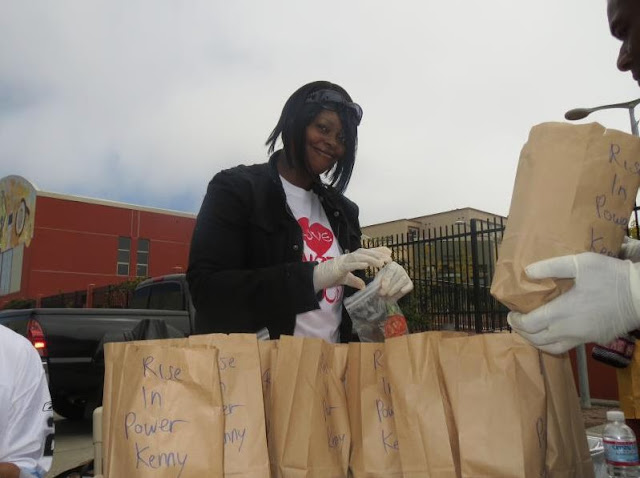 Message from Mama Denika Chatman -
THIRD SUNDAY OF EVERY MONTH, THIS IS HOW WE DO OUR COMMUNITY SERVICE. ANYONE CAN TALK $HIT, BUT IF YOUR NOT SERVING YOUR COMMUNITY, OR BEING OF SERVICE TO ANYONE OUTSIDE OF YOUR SELF THEN IT'S ALL IN VEIN. IF YOU WANT A BLESSED LIFE THEN YOU HAVE TO BE A BLESSING TO OTHER PEOPLES LIFE. I'M ASKING EVERYONE TO CHALLENGE THEIR SELF TO DO MORE SELFLESS DEEDS OUT OF PURE LOVE FOR SELF AND WATCH HOW YOUR SERVICE CONTRIBUTES TO HELPING US ALL CREATE A MUCH NEEDED CHANGE AND DON'T STOP, CONTINUE TO CHALLENGE YOUR SELF AND OTHERS.
IT'S A TRUE BLESSING TO BE OF SERVICE TO SO MANY PEOPLE! I THANK GOD FOR PUTTING IT UPON MY HEART AND CHALLENGING MY OWN OBEDIENCE TO HUMBLE MYSELF AND TO TRULY SERVE HIS WILL FOR OTHER FOLKS LIFE. I'D ALSO LIKE TO THANK THE HUNTERS POINT COMMUNITY FOR WELCOMING THE KENNETH HARDING JR FOUNDATION INTO THE COMMUNITY SO THAT WE CAN WORK AND BE OF SERVICE. I LOVE THE WHOLE COMMUNITY MINUS THE COPS AND WILL REMAIN FOCUSED, ACTIVE, AND DEDICATED TO BRINGING MUCH NEEDED CHANGE WHERE IT IS TRULY NEEDED. TEAM TFN ALL DAY EVERYDAY! STRAIGHT 415 - RIDE WIT US OR GET ROLLED OVER - SF BABY HUN KNO DAT!!!!!!! 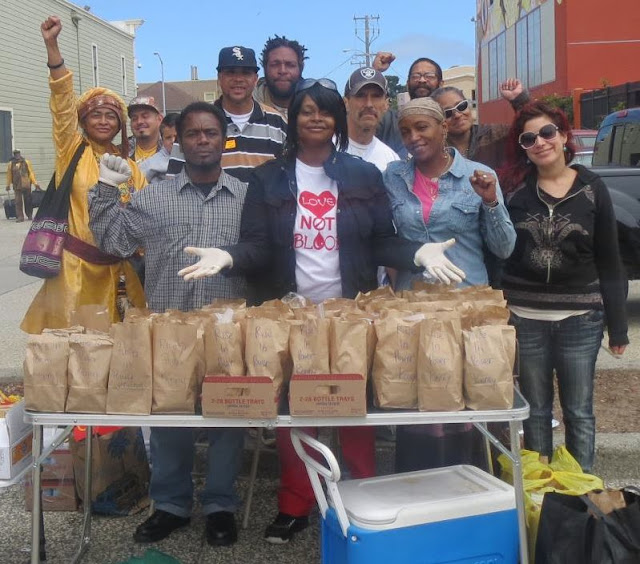 Look at Lil sis doing the works! That's all that matters, people can say what ever they want, but what you put out is what comes back to you. The proof is in your works; it's better to be a blessing to someone else's life than to be a curse to your own... HUN KNO DAT! 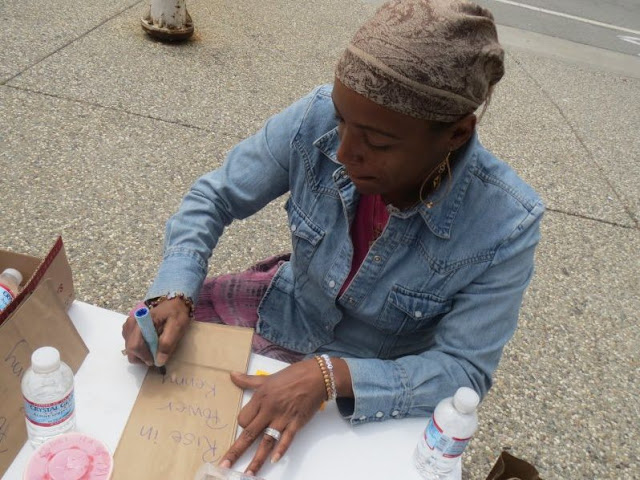 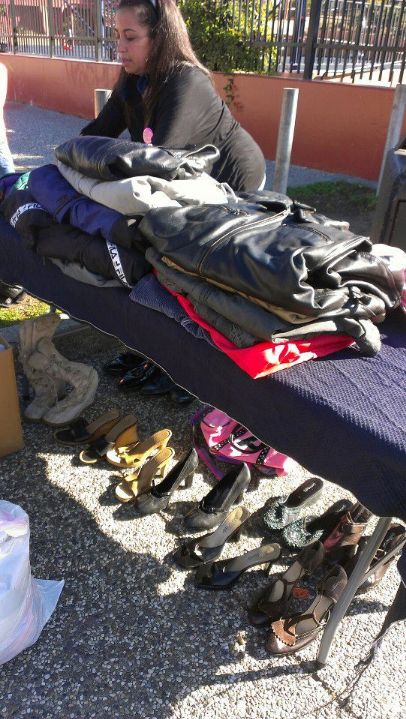 Posted by Kenneth Harding Jr. Foundation at 11:58 PM No comments:

Kenneth Harding jr. is only one of many victims of systematic police terrorism of our communities. What happened to him is akin to a modern day lynching, and was done in front of over 50 witnesses (including children), as part of SF PD's unofficial "social cleansing" regime which promotes harassment and street-executions of our people who may be innocent, but who all deserve a second chance at life.
The Kenneth Harding Foundation will continue to work for Community Justice for all People!

Kenneth Harding Foundation volunteer Tracey Bell-Borden holds up a sign for Justice, alongside our friends Charles Dubois, Fly Benzo, and others: 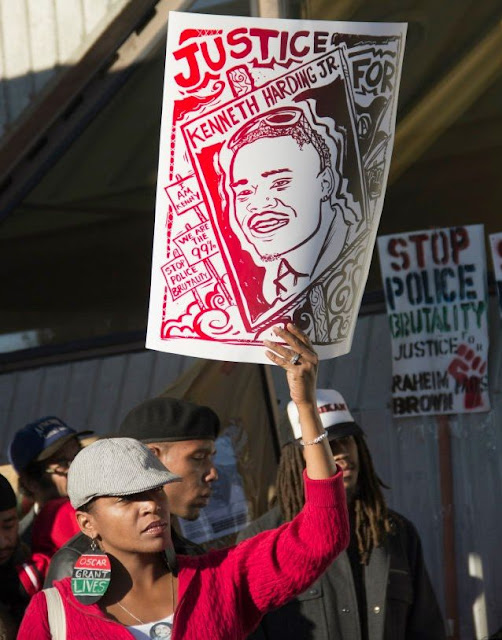 This month, we had our community feed on the 4th Sunday for "World Hunger Day".
A butterfly visited us when Mama Denika arrived and many saw it as a sign that Kenny is with us... 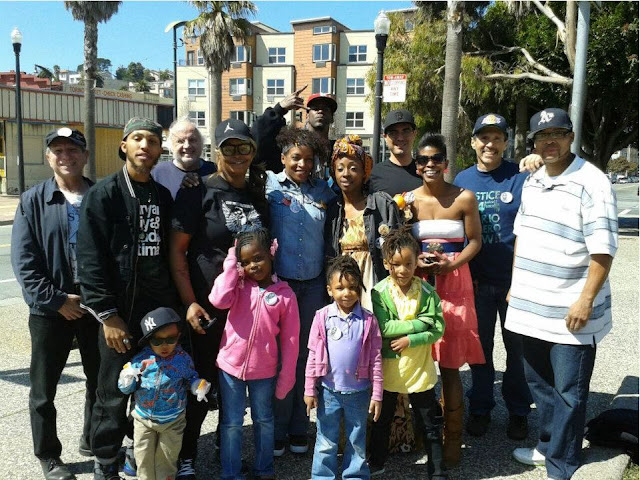 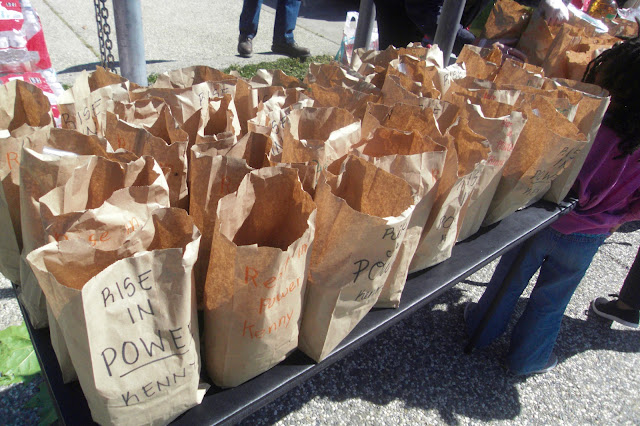 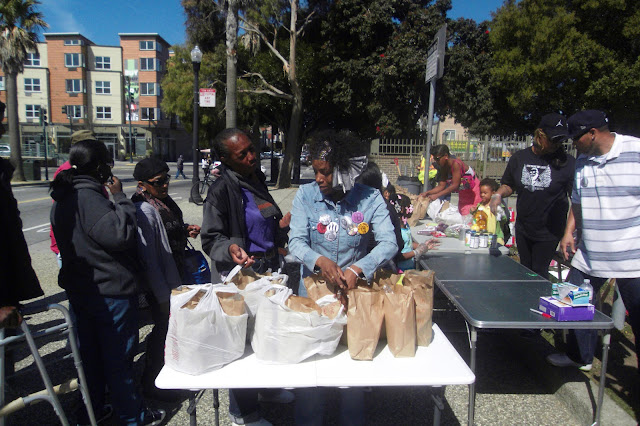 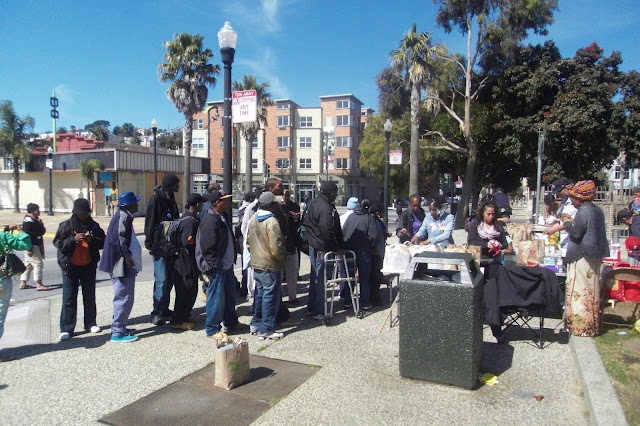 SFPD Badge #2444 arrived, despite the restraining order Denika has against them. At any point our clients, many of whom are scared of the SFPD, could have ran away or simply act "suspicious", which would have given #2444 the so-called "reason" to make an arrest or disrupt the scene. Our volunteers persevered, and would not be intimidated, bringing out their cameras taking photos. We all held a prayer, after which #2444 left on his bicycle and wasn't seen again. 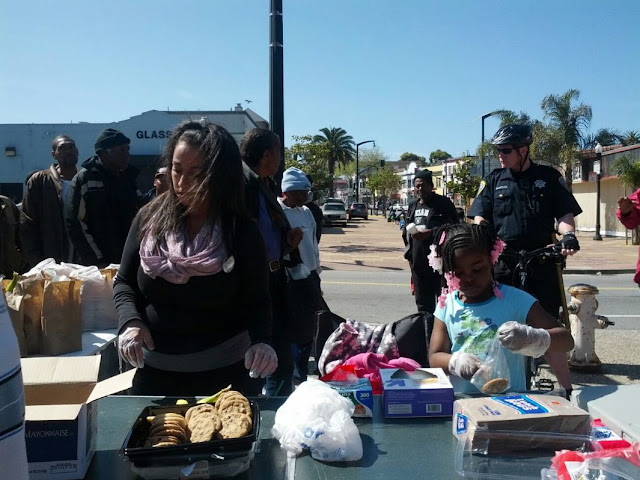 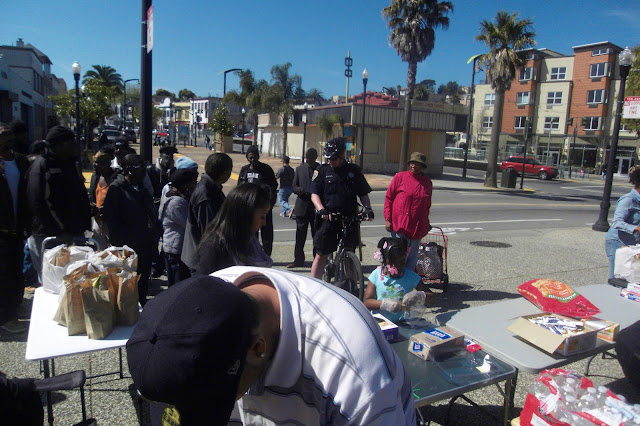 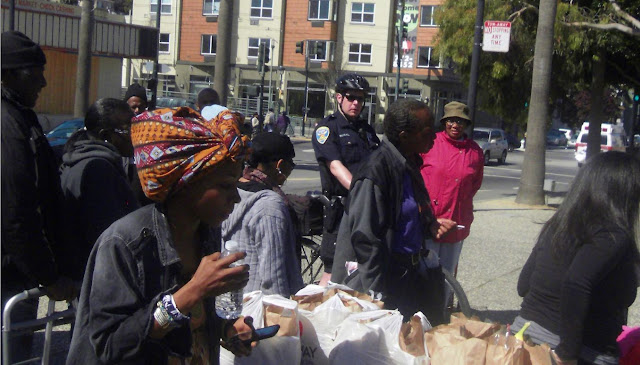 Other people stood by while #2444 was there. We believe we are under surveillance, but we were not scared. Our work towards Community Redemption continues! 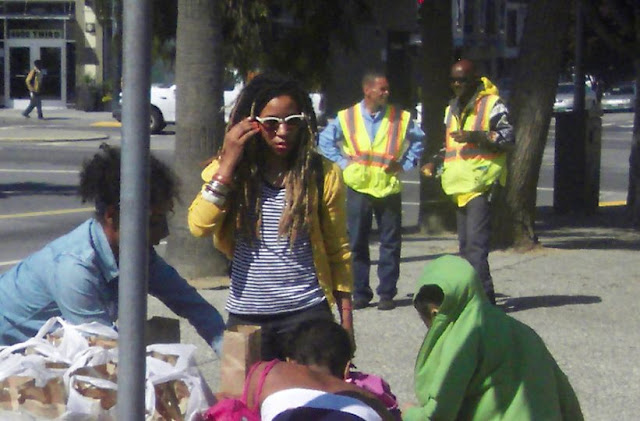 Posted by Kenneth Harding Jr. Foundation at 1:19 PM No comments:

Photograph by Al Osorio: one year anniversary of the Kenneth Harding Community Feed today, one year to give back to the community and reclaim the space from murdering SFPD. Rise in Power Kenny 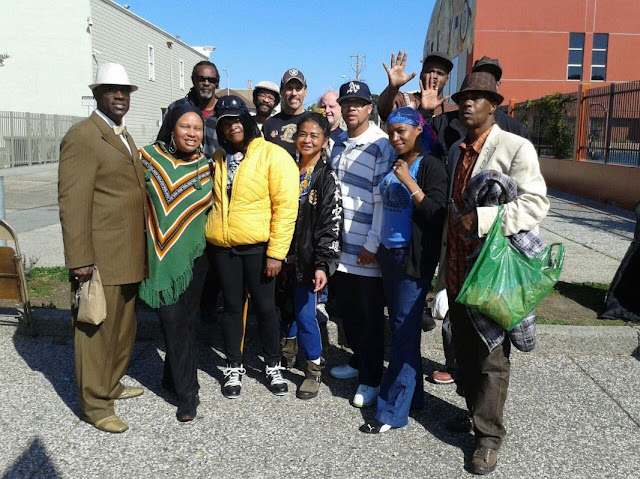 Nicole Deane: Distributing food - all power to the people. 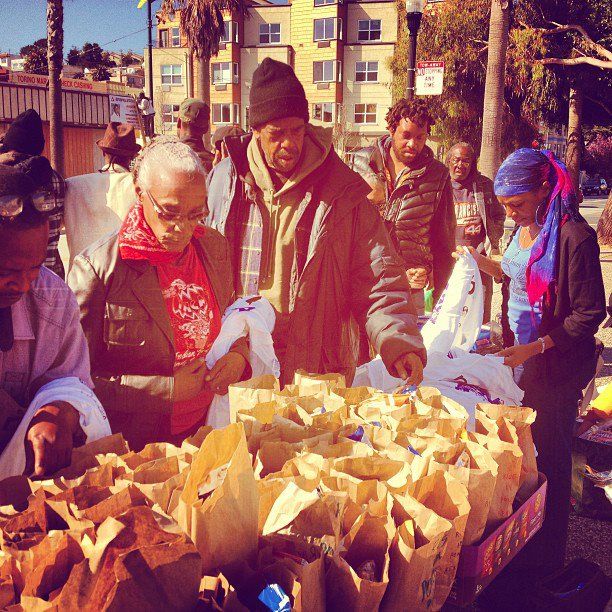 Nicole Deane: Kenny's mom and comrades feed the community at the sight where he was murdered by SFPD. 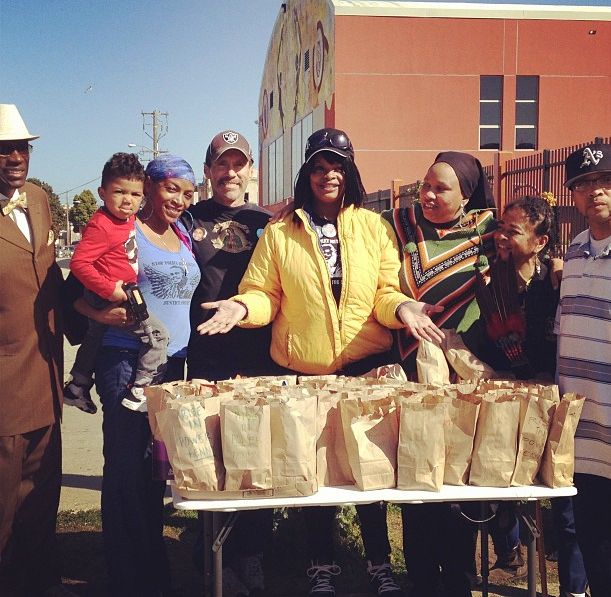 Photo from Ali [www.facebook.com/EL7EYEZ], a volunteer: 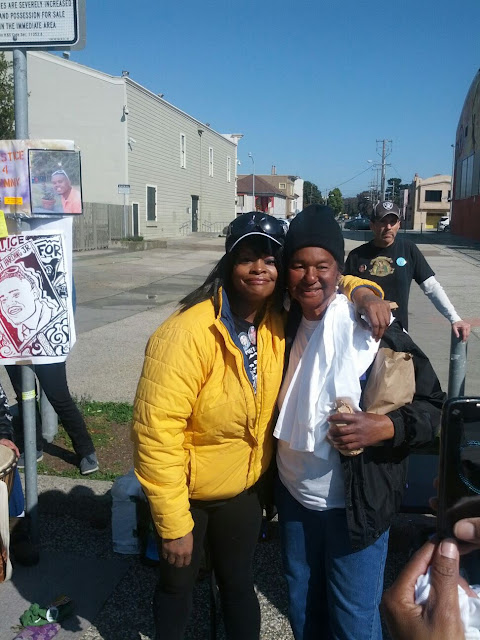 Announcement:
Kenneth Harding Jr Foundation Monthly Community Feed
Sunday, February 17, 2013
10:00am until 2:00pm
At Kenny's Plaza (Mendell Plaza) at 3RD & OAKDALE in San Francisco
WE ARE CELEBRATING OUR FIRST YEAR OF CONTINUAL COMMUNITY SERVICE!!! In February 2012 The Kenneth Harding Jr Foundation began what we know as Kenny's Community Feeds which takes place the 3rd Sunday of every month at Kenny's Korner (F.N.A. Mendell Plaza) at 3rd and Oakdale from 10am to 2pm. It is at the very sight that Kenneth Harding Jr. lost his life that his mother extends her love and heart to the people in the community that were affected by his death.
We at the Kenneth Harding Jr. Foundation appreciate your continual support! Your donations and volunteerism make it possible for us to support the Bayview Hunters Point Community. First and foremost we want to thank the BVHP community for allowing us to provide our charity amongst the people. Without your acceptance and love none of this would be possible! THANK YOU!!!
The reason we feed the community is because on July 16, 2011 19 year old Kenneth Wade Harding Jr. was brutally murdered by the SFPD over a $2.00 transit fare. While the community of Bayiew Hunters Point watched this live, the rest of the world watched the horrific video on youtube. It was evident that something needed to be done to address not only the crime against Kenny and his family but also against the community members that witnessed this crime.
In August 2011 a group of young people from Bayview, members known as the Black Star Liner Incorporated stood up against the injustice in their community by the hands of police officers paid by the tax dollars to harass and at some times kill the civilians by reaching out to the people in Kenny's Plaza (formally known as Mendell Plaza). That interaction came in the form of communication via political and educational literature, OCC complaints and planting the seed for a regular community feed. It was from that spark that Kenny's courageous mother Denika Chatman began the regular feeds in his honor on February 19, 2012. Her resilience and strength has galvanized continual community support that makes these feeds a success.
Denika's dream was to feed the community and now we feed over 100 people a day. In January 2013 we started the new year by providing over 150 coats, clothes, shoes, vitamins and grocery bags. With the help of local organizations we were able to fill needs unimagined.
Donations are needed and welcomed! Below you will find a detailed list of the essential items that make our monthly feeds such a success!

WHAT WE NEED:
* Turkey, Chicken or Beef sandwich meat (NO PORK!!!)
* Whole wheat bread
* Condiments (mayo and mustard)
* Lettuce, Tomatoes and other veggies
* Fruit both fresh and canned
* Healthy snacks (crackers, chips, granola, fruit bars, fruit snacks, pastries, nuts,yogurt ect.)
* Water
* Juice
***And anything else healthy that you think would fill the bag and a belly with love!

DONATIONS CAN BE PICKED UP OR DELIVERED! Please contact any of the hosts to make arrangements.
Thank you so much for your support in this struggle! The best way to heal the community is to provide the pathway to the basics that we have been denied as a whole. In order to fight we must feed The Body, The Mind and The Spirit!
Donations are needed and welcomed! Below you will find a detailed list of the essential items that make our monthly feeds such a success!
Posted by Kenneth Harding Jr. Foundation at 3:56 PM No comments: 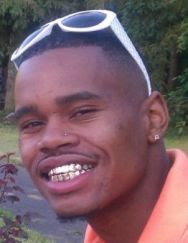